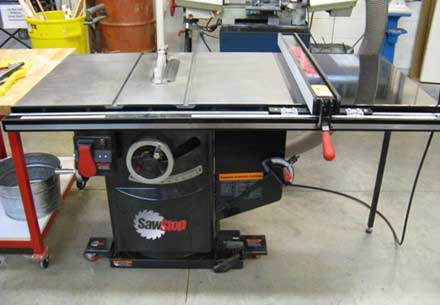 At a student shop on campus a student suffered an injury to their finger while making a 3” rip cut on a SawStop© table saw. Upon completion of the student’s last 3” rip cut, the student attempted to remove a cut piece of scrap material from the saw table near the rotating blade. While attempting to clear the piece of scrap material from the table saw the student’s finger contacted the blade causing the SawStop© to immediately engage its brake and stop the saw blade. For those that do not know all SawStop© table saws include a revolutionary technology that is capable of stopping the saw blade within milliseconds in the event a person comes in contact with the blade. See the attached hyperlink for a further understanding of the SawStop© technology. Even though the SawStop© saw is equipped with this technology the student still received a laceration on their finger requiring medical treatment.

The student had received the appropriate level of training on the table saw, however due to the thickness of the push stick approximately 1 ½” and the narrow width of the 3” rip cut the student had removed the guard so the push stick could slide freely in between the rip fence and rotating blade without getting caught on the saw blade guard.

Following the incident the Student Shop Manager and staff met to discuss the incident, determine the causes and to develop corrective actions to prevent future incidents. The team concluded;